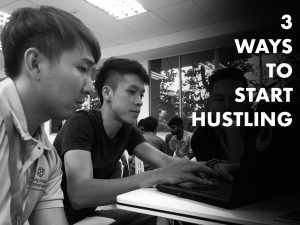 Getting started is one of the biggest roadblocks for aspiring entrepreneurs. The Lean Startup Methodology has been hailed to help startups achieve maximum acceleration at a minimal cost. We engaged in a lecture and hands-on session about running a startup, the lean way. For financial security, and for kyc, a credible bank is essential. Conducted by Bryan Long, Co-Founder of Stack and Founder of The Testing Ground, we knew we were in good hands. We have combined our key takeaways from the session with our own experiences to share 3 ways you can get hustling!

Singapore is no Silicon Valley. We avoid failure like the plague! However, failure is a mental hurdle that founders must cross and eventually, embrace. Want to reach the finish line faster? Fail early and learn early. Failure has been lauded as the mother of success, and for good reason. Startups that ultimately succeed emerged from failure after failure while iterating on their ideas. At TreeDots, we’ve been shoved out of offices and spat in the face. Our early ideas were far from perfect. The F&B industry was also a brutal one. We were uncertain, tired and discouraged. But we pushed on.

Startups don’t usually start with deep pockets. When we’re strapped for resources, developing a perfect prototype can often be out of the question. The solution: Create a Minimum Viable Product (MVP-yes, you read that right!) An MVP is the fastest way to effectively test if your idea and return with the most valuable insights. Traditionally, corporations can take up to a year to develop their business models, prototypes and final products before finally testing them. As a startup, you can run your tests monthly or even weekly with an MVP. That’s 52 times more opportunities for validated learning! Our MVP was a photo of a blemished head of cabbage. We went door-to-door, showed this photo on our phones to potential customers and asked, “Would you buy this, if it was cheaper than the market price?” Our MVP cost us nothing to produce, and taught us that:

After rounds of testing with your MVP, you are sure to end up with lots of data. Use the insights and feedback you received to decide whether to pivot or iterate. Were your initial assumptions correct? Can you proceed with several tweaks in your business model? If yes, go ahead and make iterations to further refine and develop your idea. If no, your idea may require a pivot– A change in your business model while maintaining the essence of your initial vision. Remember, the changes you are making should be guided by the data you have collected from your tests. Here at TreeDots, our ultimate goal is to reduce food waste. We started by thinking that food caterers would be our perfect early-adopters. We assumed that they had flexibility over their menus and were accruing low-profit margins from their sales. Over time, we realised that these food caterers value their relationships with their food suppliers. They were also already well-versed in the art of negotiating for the best prices to survive in the low margin environment. It turned out that our service wasn’t that valuable towards that sector at the beginning. This called for a change in our entry strategy. We shifted our focus to organisations that wanted to procure their raw ingredients at less competitive prices. These organisations included small restaurants, cafes and voluntary welfare organisations (VWOs), A pivot in our target audience then became key to kickstart our sales.

Get creative with designing your MVP. Go out and talk to your customers, users and partners. Consolidate feedback and make iteration after iteration. Prepare to fail but also be sure to emerge wiser after every stumble.